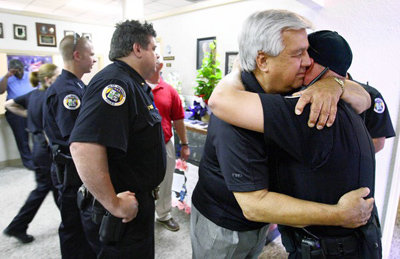 Bob Paudert, then chief of the West Memphis police force, is comforted by an officer after his son was killed while making a routine traffic stop in 2010. The shootout that ensued involved a member of the sovereign citizens movement. (Mike Brown, The Commercial Appeal / May 24, 2010)

With the FBI pounding on his door, and his wife and two children barely awake, Shawn Rice allegedly strapped on a bulletproof vest, grabbed a semiautomatic pistol and stepped out his back door on Dec. 22.

But dozens of FBI agents and local police had surrounded the ranch house in Seligman, Ariz., about 80 miles west of Flagstaff, and the only nearby cover was knee-high sagebrush. Rice ducked back inside, and warned the FBI to keep away.

After a tense 10-hour standoff, Rice, 49, was arrested. He now sits in a Las Vegas jail awaiting trial on federal money-laundering charges.

But it wasn't Rice's alleged offense alone that prompted the FBI's interest.

According to court papers, Rice was involved in the "sovereign citizen" movement, a group that has attracted little national media attention but which the FBI classifies as an "extremist antigovernment group." So-called sovereign citizens argue that they are not subject to local, state or federal laws, and some refuse to recognize the authority of courts or police.

Since 2000, members of the movement have killed six police officers, and clashes with law enforcement are on the rise, according to the FBI. The deadliest incident came in 2010, when a shootout with a member left four people dead, including two police officers, during what began as a routine traffic stop in West Memphis, Ark.

Since then, in a notable shift in policy, federal officials have stepped up their attention on sovereign citizens.

"We are focusing our efforts because of the threat of violence," said Stuart R. McArthur, a deputy assistant director in the FBI's Counterterrorism Division.

In two recent unpublished studies, the Homeland Security Department and the National Counterterrorism Center ranked the sovereign citizen movement as a major threat, along with Islamic extremists and white supremacists. The FBI assigned a supervisor to coordinate investigations of the movement last year.

"This is a movement that has absolutely exploded," said Mark Potok, a senior fellow at the Southern Poverty Law Center, a nonprofit organization based in Montgomery, Ala., that tracks domestic terrorists and hate groups. More than 100,000 Americans have aligned themselves with the sovereign citizens, the center said.

Adherents cite a patchwork of beliefs, including that the U.S. is essentially under martial law, that some U.S. constitutional amendments are invalid, and that dollars have been illegitimate since the U.S. Treasury went off the gold standard during the Great Depression.

Most important, some followers believe they are entitled to use armed force to resist arrest and fight police.

The FBI also is investigating followers for alleged mail fraud and harassment of federal officials through nuisance lawsuits and property liens. Such cases are clogging courts in every state, said Casey Carty, who heads the FBI's sovereign citizen unit.

Until recently, federal officials had steered clear of any extensive focus on right-wing extremist groups. In 2009, some members of Congress complained after a Homeland Security Department report warned that such groups might seek to recruit disaffected military veterans returning from Iraq and Afghanistan, as well as others. The report highlighted several groups, including the sovereign citizen movement.

Bowing to the criticism, Homeland Security officials gutted the office that had focused on right-wing extremism. They also canceled planned presentations and shelved a reference guide that the office had produced to inform local police about the movement.

"The topic had become too politically charged," said Daryl Johnson, who headed the team that wrote the 2009 report.

That changed after the West Memphis shootout with Jerry Kane Jr., a sovereign citizen proponent who had traveled the country offering $100-a-head seminars that taught spurious ways to avoid paying taxes, among other movement tactics.

Kane and his 16-year-old son, Joseph, were killed in the shootout. Also killed was Police Sgt. Brandon Paudert, son of the local police chief, Bob Paudert.

Paudert had never heard of the sovereign citizen movement until that day. Now retired, he has spoken to more than 75 law enforcement groups around the country warning of its danger.

Paudert remains angry that Kane wasn't identified as potentially armed and dangerous in the FBI-run database that local police normally access for warrants and other data when they stop a vehicle. He wants the FBI to change the database to flag known sovereign citizen adherents.

"If we had that, [my son] would have immediately called for backup," Paudert said. "He would be alive today."