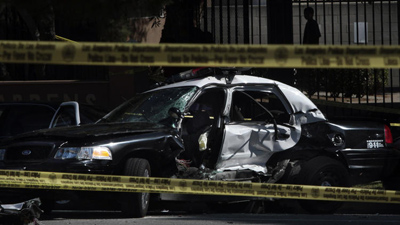 The wreck left the police car's radio unusable, forcing the other officer to use his personal cellphone to seek help. (Bob Chamberlin / Los Angeles Times)

Investigators piecing together the car crash that killed a Los Angeles police officer Saturday believe the driver involved in the deadly collision is an acquaintance of the man the officer was pursuing when he was struck, sources told The Times.

One source said the man arrested in the fatal crash was following the LAPD cruiser before the crash. Another source said there is no evidence he coordinated with the chase suspect to hit the officer.

Mynor Enrique Varela, 20, was arrested Monday on suspicion of murder after detectives determined he was driving the Chevrolet Tahoe that broadsided a LAPD patrol car driven by Officer Roberto Sanchez.

The sources stressed the investigation was far from complete as detectives were still working to fully understand the events leading up to the fatal crash.

The collision occurred shortly before 4 a.m. as Sanchez, 32, and his partner were pursuing another car -- a Chevy Camaro -- on Anaheim Street in the city's Rolling Hills neighborhood near San Pedro, according to police accounts of the incident.

When the driver of the Camaro pulled a sudden U-turn, Sanchez attempted to do the same and was hit by Varela, police allege. The impact was violent enough to crush the driver's side of the police car. Rescuers had to cut the car open to free Sanchez, a six-year veteran of the LAPD, who was pronounced dead at a nearby hospital. His partner suffered a broken jaw.

Detectives from the department's elite Robbery Homicide Division were assigned to the case and by Tuesday had established that Varela and the driver of the Camaro know each other, said multiple LAPD sources with knowledge of the investigation, who requested anonymity because the investigation is ongoing.

Police believe Varela was intentionally following the police cruiser as Sanchez and his partner tracked the Camaro, one source said. The source, however, stopped short of saying Varela is suspected of deliberately ramming the cruiser. Another source said there is no evidence suggesting Varela and the driver of the Camaro coordinated the crash.

The sources would not specify how the two men are connected or provide details about what occurred in the moments before Sanchez began to trail the Camaro. Police also have not said whether Sanchez and his partner had activated the emergency lights and siren on the patrol car, not how fast they were traveling while behind the Camaro.

Formal criminal charges are expected to be filed against Varela on Wednesday, police said. Prosecutors will have to decide whether the evidence gathered is compelling enough to justify charging Varela with murder or a lesser crime such as manslaughter.

Varela was detained by police about a mile away from the scene of the crash after he was seen fleeing, LAPD Cmdr. Andrew Smith said. Despite claims by police they had not arrested anyone in the case, jail records show Varela was arrested on Saturday afternoon and held for an unspecified crime. He was then rearrested Tuesday on suspicion of murder, records show. He is being held without bail.

Initial claims that Varela may have been intoxicated at the time of the collision were not accurate, officials said. Varela's brother, who was reportedly riding in the car with him at the time of the crash, is also being held, police sources said. It was not clear if police will arrest him in connection with the deadly crash.

Varela, according to California Department of Motor Vehicles, has a valid driver's license with no reportable accidents, citations, or suspensions.

Sanchez was the third LAPD officer killed in vehicle crashes this year. In March, Officer Nicholas Lee was killed when an out-of-control truck crushed the patrol car he was driving. And last month, motorcycle Officer Chris Cortijo died from injuries he suffered when he was waiting at a red light and was hit from behind by a woman suspected of being under the influence of drugs.