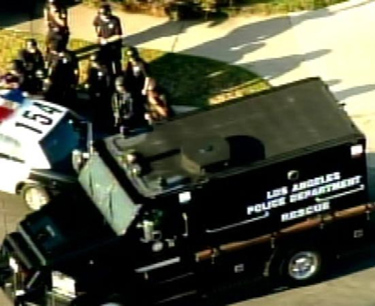 A Los Angeles Police Department officer was attacked by a suspect in Sun Valley Friday afternoon and hospitalized.

The assault occurred around 5 p.m. in the 8700 block of Lucia Place, near Sunland Boulevard, said Detective Gus Villanueva of the Los Angeles Police Department.

"One suspect is in custody for assault with a deadly weapon on an officer,'' Villanueva said. "They are searching for a second suspect.''

NBC4 LA learned at the scene the injured officer was taken to Holy Cross Hospital in Mission Hills. The patrolman was hurt after making a traffic stop and being confronted by at least one of the two suspects.