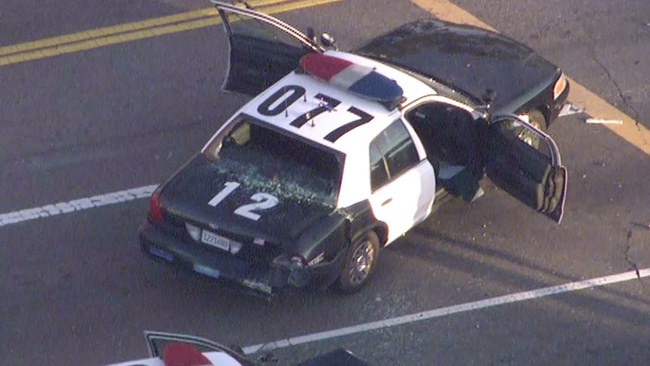 One of two suspects who are accused of engaging police in a running shootout through South Los Angeles early Monday was armed with a "high-powered" rifle that wounded a 22-year department veteran, police officials said.

The SWAT officer is expected to survive what police described as a "significant" gunshot wound to his leg.

The unidentified gunman accused of shooting the officer, however, was killed by return gunfire, said LAPD Cmdr. Andy Smith.

According to police, the final confrontation ended what had been an hours-long chase, and then search, through a freeway and South L.A. neighborhoods. It started about 2:20 a.m. when officers on patrol tried to pull over a 2001 Chevrolet Tahoe near Florence Avenue and Figueroa Street.

Instead of stopping, the SUV sped onto the northbound 110 Freeway, Smith said. The men then exited at Vernon Avenue and shot at police from inside, Smith added.

The SUV then got back onto the 110 Freeway and exited at Martin Luther King Jr. Boulevard, raced to 37th and Hill streets and crashed into the curb. As the men got out to flee, they again shot at police before running, Smith said.

Pursuing officers set up a blocks-wide perimeter and began searching with SWAT officers and K-9 units. Eventually, one of the two men was found hiding in a dumpster. Police used tear gas and flash grenades to draw him out and arrested him without further incident.

The second man was later spotted by SWAT officers. The team used their armored BearCat vehicle to approach but the man opened fire, hitting the vehicle and wounding the officer; police returned fire, killing him, Smith said.

The incident closed all but the FasTrak lanes on the northbound 110 in South L.A. as investigators combed the freeway for evidence, including any bullet fragments and shell casings. Police are also conducting similar sweeps at the scene of the two other shootouts.