The man suspected of shooting at two Los Angeles police officers, injuring one, before barricading himself inside a large Hollywood Hills home Monday has died, authorities said.

The man, who was not immediately identified, had been barricaded inside the home in the 8100 block of Gould Avenue since shortly after 8 a.m., when he fired his semiautomatic gun at two LAPD officers responding to a domestic-violence call, police said.

SWAT officers entering the home about 12:30 p.m. found the man slumped over, dead, police said. It was not immediately clear if he died from a wound suffered during the initial firefight or from a self-inflicted gunshot.

Police said attempts to contact the man prior to entering the home were unsuccessful. No other information about the man, include age, was released. 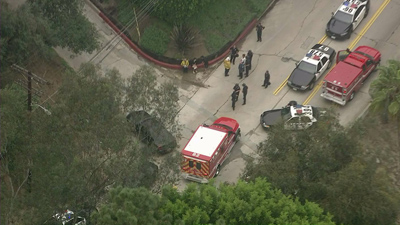 SWAT officers surround the Hollywood Hills home of a man suspected of shooting at two LAPD officers Monday, injuring one of them. (KTLA-TV / March 24, 2014)

Meanwhile, the injured officer - who sources said was wounded when she was hit in the face and arm by wood fragments - was "doing well" at a local hospital, according to a tweet posted by LAPD Chief Charlie Beck.

She was not immediately identified.

The other officer, described only as male, was also taken to the hospital to be checked out, but he was not believed to have been injured, Sgt. Frank Preciado said.

The shooting occurred as the two officers entered the threshold of the sprawling, multistory, single-family hillside home, Preciado said. Both officers returned fire, but it was not immediately known if the man was hit before barricading himself inside.

Two other men were home at the time, Preciado said. One was taken to the hospital with an unspecific leg injury, while the other remained at the scene and was cooperating with authorities.