Skip to main content
02
Feb 2012
From tragedy to activism 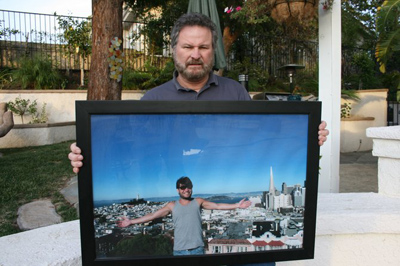 Don Rosenberg holds a photo of his son Drew, who was killed when his motorcycle was hit by an unlicensed driver. (FRANCISCO CASTRO)

On that day, an unlicensed driver and suspected illegal immigrant collided with the eldest of his three children, 25-year-old Drew, when he was traveling on a motorcycle and crossing an intersection in the city of San Francisco.

The unlicensed driver, Robert Galo, made a left turn and hit Drew, who was a law student.

"He ran over his abdomen and the impact knocked my son's helmet off; one of the car's tires was stopped by the helmet," said Rosenberg in an interview with Hoy."[Galo] then backed up and drove over Drew a second time."

Rosenberg continues to travel to San Francisco to follow the case against Galo, who, he claims, faces only misdemeanor charges that would result in a maximum sentence of a year in jail and a $1,000 fine. The father blames this situation on judicial inadequacies.

What bothers Rosenberg the most is that five months before Gallo collided with his son, the San Francisco Police Department stopped him for driving the wrong way on a one-way street, unlicensed and uninsured.

The car was seized, but San Francisco's policy allowed another person, to whom Galo gave the registration papers, to get the car out the next day; Galo continued driving.

"If he had taken the car, maybe my son would be alive today," said Rosenberg, who describes himself as a liberal and says that a person's immigration status doesn't matter to him.

"I do not care if he's here legally or illegally, but he killed my son," he said.

Since Drew's death, Rosenberg has become a tireless fighter against laws or initiatives that reduce or eliminate penalties for unlicensed drivers. He spoke out last week during a meeting in the San Fernando Valley.

There, the Police Commission heard from people who oppose a change that Los Angeles Police Department Chief of Police Charlie Beck plans to make to the impound policy for cars driven by unlicensed drivers.

Last year the LAPD put a stop to the confiscation of unlicensed drivers' cars at DUI checkpoints, allowing those people to call someone with a license to pick up the car and drive it home.

Now, Beck plans to extend this practice to regular traffic stops conducted by the LAPD.

Drew Rosenberg died in an accident with an unlicensed driver in San Francisco. (Francisco Castro)

These plans aren't sitting well with Rosenberg. For him, this would mean more accidents and deaths on the roads due to the presence of these drivers who do not know how to drive or do not know the traffic rules of this country.

"If you get punished, you stop doing something; and right now the punishment is that it costs people $1,700 to get the car out [of the impound yard]," said Rosenberg.

"A lot of these people say, 'I will not drive because I have no money to take the car,'" he said.

"Giving the car back to these people makes the problem worse," he said. "The LAPD is making life easier for them [unlicensed drivers], but at the expense of creating more accidents and more deaths in the streets."

A study by the American Automobile Association (AAA) indicates that of the 40,000 fatal crashes that occur each year nationwide, 20 percent involve an unlicensed driver.

The Police Protective League (LAPPL), which represents LAPD officers, has also spoken out against the change proposed by Chief Beck.

The organization's president Paul Weber said in a statement, "The value and wisdom of seizing vehicles driven by unlicensed drivers is twofold."

"First, an unlicensed driver who is willing to ignore laws, is at least temporarily, less able to break the law because they will not have access to the impounded vehicle. Second, the cost and inconvenience of recovering an impounded car will discourage unlicensed people from driving," continued Weber.

The change proposed by the Chief Beck applies to only the first instance and would not apply to drivers with a suspended or revoked license. Moreover, this does not mean that the unlicensed driver will not face a costly citation.

"My proposed changes would require that the person have insurance, some form of identification, not have caused an accident and not have had a prior conviction," said Beck. "And the car would only be released to a licensed person who had the permission of the owner or was the owner of the car."

Mayor Antonio Villaraigosa also supports the initiative and, when questioned about the claim that the change would create more dangers on the roads, said those arguments had no basis.

Charlie Beck, head of the LAPD proposes to end the confiscation of cars of people without licenses in traffic stops. (Francisco Castro)

"I think those arguments are not based on facts," said the mayor.

Not all of the 28,000 cars being seized for least 30 days remained in the impound lot for that long before being recovered by their owners, which on average costs about $1,500.

Erlin GarcÍa, a 25-year-old Honduran, was one of the persons whose car was seized by the LAPD's last year for not having a driver's license.

According to Garcia, he was driving to his construction job in the early hours of the morning when an officer stopped him because he looked too young to be behind the wheel.

However, realizing that he had no license, the officer told him he had to take the car.

The cost of the violation was $750 and getting the car out of the impound yard would've cost another $1,750. "I had no money to get it out and gave it up," he said.

That was the second time in the last four years that authorities seized a car from Garcia for driving without a license.

Now, he says, he relies on rides and the bus for transportation, although this sometimes makes getting to work hard. "Sometimes if you do not drive, you don't work. If you don't have a ride, you are forced to drive because there are places where the bus doesn't go," said Garcia.

However, he said he prefers not to drive for fear of having another vehicle impounded. "It hurts to have them take the car after you worked so hard to buy it," he said. "It's demoralizing."

Ron Gochez, head of the Southern California Immigration Coalition, who has been calling for a halt to the impoundment of unlicensed drivers' cars, especially those who are undocumented, does not agree that these drivers are a danger on the roads.

"Over 80 percent of all traffic accidents involve licensed drivers," he said. "The number of unlicensed persons that cause accidents are in the minority."

He added that when a person loses his car, it affects the entire family.

"People lose their jobs or their way of life. As a teacher, I see how many children arrive late because their parents cannot take them to school, or sometimes people do not live near a supermarket," said the community activist.

Gochez also said the LAPD policy change is just one step toward the ultimate goal, to give driver's licenses to everyone in the state, whether they're in the country legally or illegally, as was done in California before 1994.

"It is unrealistic to think that thousands of people without papers are not going to drive," he stressed. "It's going to happen and the wisest thing to do is allow them to take the exam and pay for a license."

Rosenberg supports giving driver's licenses to undocumented people, but he also said that current law does not allow it and therefore people who drive without a license are breaking the law of the state of California.

"We are a nation of laws, many of which are unfair," said Rosenberg.

He also says that if the LAPD changes its unlicensed driver impound policy, he will continue his fight. He said he plans to quit his job to devote his full time to fight for tougher laws on this issue, in part through a website called unlicensedtokill.org, where information and education on this topic will be available.