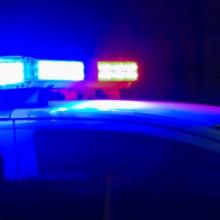 The male driver, who was not identified by police, was arrested at the scene at Hazeltine Avenue and Ventura Boulevard on suspicion of felony driving under the influence at a little after midnight, according to Los Angeles Police Officer Mike Lopez.

The two officers were taken to the hospital. Lopez said he could not offer any additional detail about their injuries, including whether they had been released after treatment or remained hospitalized.