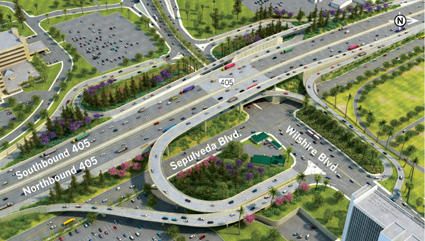 Transportation officials plan to shut down some entry and exit points between the nation's most congested freeway and one of Los Angeles' busiest boulevards as part of an ongoing project to add a 10-mile carpool lane through the Sepulveda Pass on the 405 Freeway.

The ramps will be closed in succession, for periods of two weeks to three months each. The new ramps will be designed to reduce traffic backups and dangerous lane-weaving.

The work will affect tens of thousands of daily commuters, who will be forced to find alternate routes to and from the Westside.

"It's going to be a huge pain," said Steven Lutsky, who lives in Westwood and works an early shift at a TV studio in Studio City. "Getting home is probably going to be a serious hassle."

"There's no end to the misery after 90 days," said Dave Sotero, a spokesman for the Los Angeles County Metropolitan Transportation Authority. "It continues."

Disruptions from shutdowns, bridge reconstructions and detours on the 405 have caused headaches for years. Drawing the most attention was last July's unprecedented two-way closure of the 405. Although nicknamed "Carmageddon," that event failed to produce gridlock because people stayed home or adjusted travel schedules. Late this summer, Metro plans Carmageddon 2, another weekend-long closure of the 405 in both directions.

Area residents anticipate that the ramp closures will dump traffic onto already packed routes such as Sepulveda, Santa Monica and Sunset boulevards.

"The closures will create chaos for the entire area as commuters seek alternate on- or off-ramps," said Debbie Nussbaum, chairwoman of the Westwood Hills Property Owners Assn.'s traffic committee. "They have the potential for completely gridlocking the streets surrounding the residential neighborhoods in Westwood and Brentwood."

The Veterans Affairs West Los Angeles campus has advised employees to allow twice as much time as usual for commuting. To reduce cut-through traffic and help ensure access for emergency vehicles, the campus plans to close its gates on Eisenhower and Gorham avenues. UCLA has urged employees to telecommute, work alternative hours and carpool, bike or walk.

Blair House, a condo building on Wilshire Boulevard in Westwood, has agreed to subsidize monthly bus passes for its employees and caregivers, housekeepers and other workers employed by residents. To date, 23 people have accepted the offer, said Henry Basile, general manager.

On Thursday night, workers will restripe and reconfigure key streets in the area. Sepulveda Boulevard between Wilshire and Montana Avenue will be closed overnight, as will two lanes in each direction of eastbound and westbound Wilshire between Veteran and Federal avenues. Other street closures are planned. For information, see the project website.

The Los Angeles Department of Transportation will try to alleviate some of the pain. It will install electronic road signs a mile before the closure area to give motorists time to divert, and it will station traffic officers at key intersections.

Residents say the contingency plans and recommended detour options are inadequate. Cori Solomon, president of the Brentwood Glen Assn., predicts monumental jams. "At every turn ... you can't get anywhere," she said.