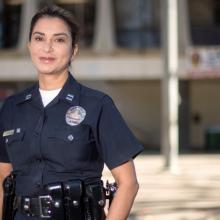 Ignoring the errors resulted in serious incidents being under-reported, which can have a significant effect on how police plan and pay for their strategies to fight crime in L.A.

“As a citizen, it gives you a false sense of security that you are safe when in fact that might not be the case,” Carranza, a 28-year LAPD veteran, said at an afternoon news conference Monday at her attorney’s office in Beverly Hills. “It also affects the way we deploy resources, the support we get from federal grants, and in my case and in my officers case, who gets the support of discretionary resources and who doesn’t.”

In her government claim against the city, a precursor to a lawsuit, Carranza said she found under-reporting in a number of stations she audited, ranging from the LAPD’s Foothill and Mission divisions to its Central and Pacific divisions.

For the divisions she audited, Carranza found that LAPD was under-reporting violent crime for 2016 by about 10 percent, she said.

Carranza argued that certain staff members may have falsified information — engaging in “cooking of the books” — in order to get promotions, accolades and increased responsibility.

“You make it look like you’re doing a great job, and the next thing you know, you are being promoted,” said Carranza, who noted she has been raising the issue with her superiors since 2014.

When officers make errors on crime reports, the mistakes are supposed to be corrected once they reach a watch commander, a records clerk or a detective, Carranza explained.

However, in some cases, such errors were not recognized or fixed, she said. Someone, for example, could be attacked with a firearm and the incident would be incorrectly coded as a simple assault, which would not get counted in the city’s serious violent crime statistics, rather than an aggravated assault.

She said after complaining of the errors to command staff, no action was taken. In fact, she was ordered to “stand down,” according to the claim.

Carranza argued that she was retaliated against for bringing up the issue by not being promoted to the rank of commander and by not receiving adequate resources for her division.

The captain said she has evidence to back up her claims — but she and her attorney declined to release it. Her attorney, Gregory Smith, said the information might be considered confidential by the department.

The department said it could not comment on pending litigation.

But in statement, department officials appeared to stand by the numbers, saying the agency is a model of accuracy across the country and has a “robust” unit devoted to vetting its statistics. The civilian Police Commission that also reviews the numbers, the statement said.

“The LAPD has a robust system of training, inspection, accountability and auditing of crime classifications to ensure that crime reports are accurately reported to the FBI under the National Uniform Crime Reporting System (UCR),” the statement said.

The statement said the department established its Data Integrity Unit, which is charged with ongoing inspections, training officers and securing tools to ensure crime statistics are accurate.

“When errors are found, records are corrected and additional training and other corrective action is taken,” the statement said.

In her claim, Carranza said that she was consistently rebuffed by her supervisors until 2016, despite her decision to file a report with the Office of Inspector General, alleging that crime stats for 2016 were being “intentionally under-reported” by command officers.

A spokesman for the Los Angeles Police Protective League, the union which represents some 9,800 LAPD officers up to the rank of lieutenant, said recent instances of violent crime under-reporting indicate represent a breakdown within the department’s systems and demonstrate a lack of respect for the tough decisions the mayor and City Council must make to keep neighborhoods safe.

“This recent allegation of crime under-reporting in Los Angeles should be taken very seriously, and if found to be true, then swift action must be taken to remedy this unacceptable situation, not just another round of lip service,” he added.

A 2015 audit by an independent watchdog of the department found that a “significant number” of crimes that were categorized as simple assaults from 2008-2014 were actually aggravated assaults and should have been included as part of the violent crime statistics that are submitted the FBI and disclosed to the public.

The Office of the Inspector General found that if the crimes had been classified correctly during those seven years, the rate of aggravated assaults reported to the FBI and the public would have been an average of 36 percent higher.

The department misclassified an average of 3,700 aggravated assaults as less severe crimes in each of the seven years, the audit found, amounting to a total of more than 25,000 crimes improperly categorized.

The inspector general’s office estimated that 9 percent of the crimes that were categorized as simple assaults should have been classified as aggravated assaults. Simple assaults are not included in reports to the FBI or disclosed to the public.

Meanwhile, a few other crimes were also improperly categorized as kidnappings, sexual assaults or other types of less severe crimes, but should have been logged as aggravated assaults, the audit found.

The inspector general’s office based its estimates on a sampling of 3,856 crimes.