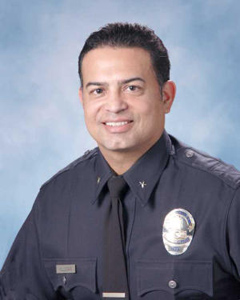 The LAPD's Jorge Villegas is the Valley's new commander.

The former second-in-command of LAPD's Valley Bureau is returning to his old turf, this time to assume the top post.

Cmdr. Jorge A. Villegas will succeed Deputy Chief Kirk Albanese, who will take over as head of the Detective Bureau on Nov. 6.

"I feel very excited, enthusiastic," Villegas said. "I'm looking forward to the challenges and working with the community."

As the highest-ranking officer in the San Fernando Valley, Villegas will oversee operations at Valley Traffic Division and seven police stations, which encompass 222 square miles and a population of 1.27 million.

Villegas said he plans to continue clamping down on violent crime, which is already 14 percent below last year's levels, and to engage residents in helping fight crime in their neighborhoods.

"We're going to address community issues and engage in a very assertive outreach program in terms of community policing," he said.

Villegas, a Los Angeles native, was an assistant commander at Valley Bureau from January 2008 to March 2009. He previously was the commanding officer of Mission Division, which encompasses Panorama City, Sylmar, Mission Hills, Panorama City, North Hills and Granada Hills.

"Jorge Villegas is an accomplished leader, somebody that the organization ... feels very strongly about," said Albanese, who leaves the Valley after nearly two years as its top cop. "He's smart, he's agile, and he's going to hit the ground running."

Villegas joined the department in 1989 and has since worked patrol in Van Nuys and other assignments including narcotics, gangs, detectives and administration. He was promoted to commander in 2009.

Villegas earned a bachelor's degree in public administration and a graduate degree in organizational management from Azusa Pacific University. He also graduated from the Delinquency Control Institute at the University of Southern California, the FBI National Academy and the West Point Leadership Development Program.