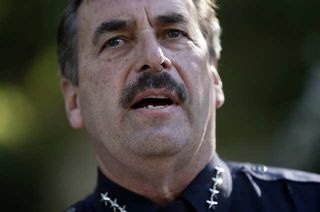 Violent crime fell nearly 10%, including an 8% drop in homicides with 147 killings recorded since the start of the year, police said.

Last year, Los Angeles recorded 297 homicides -- the fewest since 1966, city officials said at a news conference, suggesting the city is again on track to see fewer than 300 killings by the end of this year.

"That's a number I never thought I would see as a Los Angeles police officer," said Police Chief Charlie Beck.

Nearly every type of offense, including robberies, rapes, burglaries and thefts, continued to decline, defying some predictions that crime would spike as the economy slumped. Crimes tied to gangs dropped by 16%.

Calling the across-the-board gains "extraordinary," Mayor Antonio Villaraigosa said, "all of these reductions, after historic lows last year and the year before, are a testimony to the unwavering dedication of public safety."

One category bucked the trend, officials said. Assaults on police officers by suspects using deadly weapons rose more than 50%, with 104 incidents in the first half of 2011, police said. At this point last year, there had been 68 such attacks.