Skip to main content
14
Feb 2013
In wake of Dorner shootout, questions over use of 'the burner' 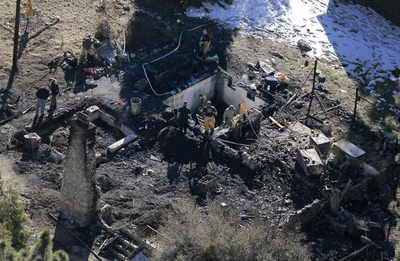 After what LAPD Chief Charlie Beck called "a bittersweet night," investigators Wednesday were in the process of identifying the human remains found in the charred cabin where fugitive ex-cop Christopher Dorner was believed to have been holed up after trading gunfire with officers, authorities said. (Brian van der Brug / Los Angeles Times / February 13, 2013 )

The day's light was fading when the SWAT officers decided they could wait no longer for Christopher Dorner to surrender.

Dorner, the fired Los Angeles cop suspected of killing four people in a campaign of revenge, had been holed up in a cabin near Big Bear Lake for hours, trading gunfire with San Bernardino County sheriff's deputies. Repeated calls over a loudspeaker for him to surrender went ignored. Attempts to flush him out with tear gas led nowhere.

Wanting to end the standoff before nightfall, members of the sheriff's SWAT unit enacted a plan they had devised for a final assault on the cabin, according to law enforcement sources. An officer drove a demolition vehicle up to the building and methodically tore down most of its walls, the sources said.

With the cabin's interior exposed, the officer got on the radio to others awaiting his order. "We're going to go forward with the plan, with the burner," the unidentified officer said, according to a recording of police radio transmissions reviewed by The Times.

"The burner" was shorthand for a grenade-like canister containing a more powerful type of tear gas than had been used earlier. Police use the nickname because of the intense heat the device gives off, which often causes a fire.

"Seven burners deployed," another officer responded several seconds later, according to the transmission which has circulated widely among law enforcement officials. "And we have a fire."

Within minutes the cabin was fully engulfed in flames, ending a dramatic manhunt that captivated the nation.

The SWAT radio transmission, in addition to the comments of at least one officer who earlier in the gun battle could be heard by a TV reporter calling for the cabin to be burned down, have raised questions as to whether authorities intended to end the standoff by setting the structure on fire. San Bernardino County Sheriff John McMahon at a Wednesday press conference adamantly denied that was the intent. But the department on Thursday declined to answer further questions about the standoff.

Multiple sources, who were at the scene and asked that their names not be used because they were not authorized to discuss the case, said the decision to use the incendiary gas canisters came amid mounting concern that time and options were running out.

Dorner, they said, had not communicated with police at any point during the siege and had continued to fire off rounds at them with high-caliber weapons. "Any time they moved, this guy was shooting," one source said. Bringing large floodlights into the area was deemed too dangerous and police worried Dorner might have night-vision goggles that would soon give him an advantage.

When they eventually moved in with the demolition vehicle and began to get glimpses into the cabin as the walls were torn down, Dorner's whereabouts and condition were unknown. On the radio transmission, one officer describes seeing blood splattered inside the cabin and then another reports hearing a single gunshot being fired, raising the possibility that Dorner may have killed himself before the fire engulfed the cabin.

On Thursday, the San Bernardino County Sheriff's Department announced dental records had confirmed what had been widely assumed since the showdown - that the charred body found in the cabin rubble was Dorner's. The test results brought to a definitive close the epic manhunt for Dorner, 33, who police say killed a deputy during the cabin shootout, a Riverside police officer and an Irvine couple as part of a plot to retaliate against the Los Angeles Police Department for firing him in 2009.

Samuel Walker, emeritus professor of criminal justice at the University of Nebraska Omaha, was critical of the decision to use the "burner" tear gas canisters.

"It's true, he was firing at them. But he was cornered. He was trapped. At that point, there was no rush in the sense that he was barricaded. The standard rules on barricade situations are that you can wait the person out," Walker said. "To use a known incendiary device raises some very serious questions in my mind."

Other law enforcement experts interviewed by The Times, however, said the move was justified. Even though SWAT officers were certain to have known a fire was a strong possibility, the use of the gas was reasonable in the face of the deadly threat Dorner presented, they said. Allowing the standoff to carry on into the night, they emphasized, would have added an unpredictable element to the drama that officials were smart to avoid.

"What difference does it make if one of the officers puts a ... round in his head, drives the armored vehicle over his body when they are knocking the building down, or he dies in a conflagration?" said David Klinger, a use-of-force expert at the University of Missouri at St. Louis and a former LAPD officer. "If he is trying to surrender you can't do any of those things ... But if he is actively trying to murder people, there's no doubt that deadly force is appropriate and it doesn't matter what method is used to deliver it."

Geoffery Alpert, a professor at the University of South Carolina who also specializes in police tactics, agreed.

"I don't understand what the big deal is," Alpert said. "This man had already shot two officers and was suspected of murdering other people. He wasn't responding in a rational manner. The actions you take have to remove the threat and if it requires extreme measures, then so be it."