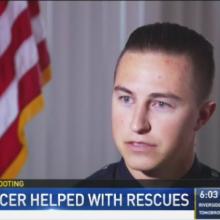 An off-duty Los Angeles police officer, Mitchell Tosti, rushed in to save a cancer patient in the mass shooting in Las Vegas. <em>(Screenshot from video.)</em>

As chaos unfolded during the mass shooting in Las Vegas, Cassidy Huff was completely exhausted. Coming off of chemotherapy for cancer, she simply could not run anymore as she tried to flee gunfire.

The 20-year-old collapsed behind a car. That's when Mitchell Tosti appeared.

Tosti is a Los Angeles police officer who was in Las Vegas off-duty at the time.

"You don't know who you're helping at that point," Tosti recalls.

To reassure her — in that moment of fear and chaos — he was an off-duty officer with the LAPD. He picked Huff up and they started running.

"I remember her saying, 'I'm scared. I don't understand why somebody would do this,'" Tosti said. He replied, "We're all scared. But we're going to get through this."

And they did — along with Tosti's fiancée who held on to Huff's mother, Kelley.

Ducking for cover every few minutes, Tosti carried all 92 pounds of Cassidy to the MGM Grand hotel. It was there that a retired police officer spirited Huff and her mother away.

Tosti and his fiancée disappeared into the crowd.

Huff never got his name, but she knew she had to find him. Huff's father is also an officer from Nevada.

With the help of the Los Angeles police union and a few Facebook postings of Tosti's photo, they found him this week.