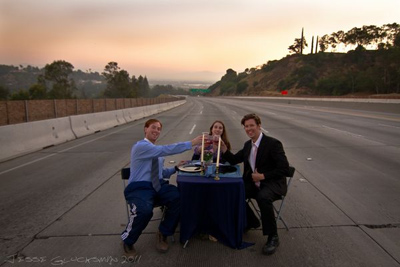 Matt Corrigan, from left, Amanda Corrigan and Barry Neely on the 405 Freeway during Carmageddon. (Jesse Glucksman)

For better or worse, Matt Corrigan believes the bar has been raised for any Carmageddon II shenanigans. He just won't be the one jumping over it.

Corrigan, 30, of Sherman Oaks organized a seconds-long dinner party on an empty stretch of the 405 Freeway during the first closure in July 2011. As construction workers wrapped up the demolition of the southern half of the Mulholland Drive bridge, Corrigan, his wife and a friend placed their centerpiece on a table and posed for the camera.

The photo, which features a rushed Corrigan in a dress shirt, tie and windbreaker pants, was snapped just before they got shooed away.

"This year, if I had a great idea, I would be all about it, but it's been done before," Corrigan said. "I'm a big proponent of not pushing my luck too far."

Since last year's freeway escapade, Corrigan said he has received a story about the prank published in a Kosovo newspaper and has been contacted on Facebook about potentially leading a parade on the closed portion of the freeway this weekend.

Corrigan said he politely declined the Facebook user's request, only to have the user reply, "You have to go big or go home."

"My wife is really concerned that someone is going to try and top us," Corrigan said.

The California Highway Patrol is concerned, too. Spokesman Ming-Yang Hsu said there will be "zero tolerance" this year for people with big ideas.

"People are either going to get arrested or they're going to get cited," he said. "Our department was basically embarrassed by the shenanigans that occurred and people posting it all. Even though we were being lenient ... we're cutting that out now."

Hsu said it is a violation of the California vehicle code for pedestrians to be on the freeway -- closed or not, adding that violators could face a fine or jail time.

Corrigan predicts people will be watching the road to see if anything "goofy" occurs. He and his wife have blown up the picture of their dinner party and framed it. But more than a year later, the picture has yet to be hung.