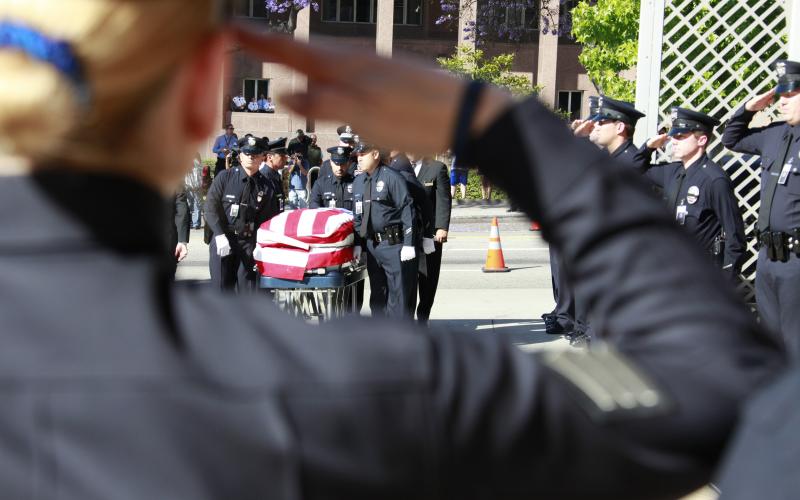 The year 2016 was a deadly and dangerous year for American police officers, yet there were no mass protests or marches or kneeling to bring attention to the tragedies faced by these fallen public servants and their families. The number of American police officers murdered while on duty skyrocketed 61% over 2015, and 14% more police officers were assaulted compared to the previous year. These disturbing increases were contained in the FBI’s 2016 Law Enforcement Officers Killed & Assaulted report.

In real terms, 66 families watched their loved one leave for work and never return; 57,180 families sent their loved one off to work, only to see him or her injured upon their return, having been assaulted while on duty.

With a 61% increase in the number of officers murdered while protecting their communities, we’d expect to hear an outcry from our political and civic leaders across the country. Maybe even a sense of urgency to look at the underlying contributors to this increase in violence targeting law enforcement. Unfortunately, the silence and inaction are both deafening and saddening.

Policymakers in California should re-examine their penchant for giving second, third, fourth and in some cases, dozens of chances to criminals. They should look beyond just how many police officers were murdered on duty and how many were assaulted, and look at who these criminals are. If they were to scratch the surface and look at the 59 murder suspects, here’s what they would learn—and maybe, just maybe, they would re-think the next push to allow more criminals back onto our streets:

Overwhelmingly, these cowards were repeat career criminals who chose to murder law enforcement officers in cold blood. In California, we’ve seen our political leaders and career criminal apologists tout “criminal justice reform” through laws such as AB 109 and Propositions 47 and 57. These poorly thought out “reforms” have done nothing to make us safer as was promised. They’ve emboldened criminals to do as they please, and we’ve seen violent crime, property crime and attacks on police officers all increase.

Too often after a police officer is killed, we’re subjected to another round of our “hearts and prayers” go out to our families without any concrete actions to prevent these tragedies from happening in the future.

Now, more than ever, it’s a dangerous time to be a police officer. We deserve a true seat at the table as our local, state and federal governments contemplate policies that will impact the public’s safety and our safety. We deserve to be at the table in any discussions about community/police relations. Too often, we are talked about and our profession is talked about without police officers being spoken to. That must change so years like 2016 are never repeated.