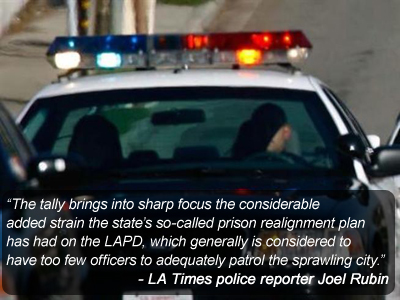 When Los Angeles residents need a police officer, they expect and deserve an immediate response. But it is getting harder to deliver on that expectation because LAPD officers are being pulled away from what they were hired to do in order to keep tabs on thousands of felons living in the city after their early release from prison. That used to be – and still should be – the responsibility of state parole officers.

The origin of the problem is a U.S. Supreme Court order to reduce the California’s prison population by 32,000 by 2013. That led to the Public Safety Realignment Act or AB109 that was signed into law in April 2011. AB109 altered the criminal justice system by changing felony sentencing, shifting housing for so-called low-level, non-violent offenders from state prison to county jails and transferring supervision of designated parolees to local agencies.

In a report to the Police Commission this week, the LAPD revealed that the Department has had to assign up to 170 full-time officers to keep tabs on some 5,400 felons who are living in Los Angeles after their release from prison. An estimated $18 million of the LAPD budget will be spent this fiscal year on these officers. But the most shocking statistic in the report is that LAPD has arrested 57 percent of these felons on suspicion of committing new crimes or for probation violations.

As we have pointed out previously in this blog, upon closer scrutiny, many low-level, non-violent offenders turn out to be clear and present threats to public safety. This occurs because of the way the state assesses which felons are eligible for release to local communities under AB109.

In a story Tuesday, LA Times police reporter Joel Rubin astutely observed: “The tally brings into sharp focus the considerable added strain the state’s so-called prison realignment plan has had on the LAPD, which generally is considered to have too few officers to adequately patrol the sprawling city.”

With the economy improving along with the state budget, it is time for the state legislature and the Governor to repair the damage done by AB109. The sooner they do, the sooner the men and women of the LAPD can stop standing in for parole officers and resume doing what they were hired to do and what L.A. residents expect them to do.