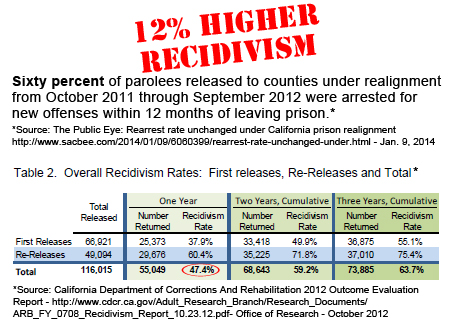 Advocates were wishing and hoping that California’s high recidivism rate – the percentage of inmates who commit new crimes soon after release from prison – would decline when prison realignment took hold. The idea was that as the state downsized its prison population by 25,000 by transferring inmates to county jails, local officials would be better able to provide community-based corrections that would reduce recidivism.

Skeptics (we were and are among them) understood that limited jail space for parole violators meant that counties would end up releasing inmates early and that already overloaded probation officers would have difficulty monitoring with an increased workload. We were also concerned that the program was underfunded.

We are now getting a clearer picture of what is happening in the real world.

One of the best sources to date for evaluating the realignment program is a recently published analysis of state data by the Sacramento Bee. The data shows about 60 percent of parolees released to counties from October 2011 through September 2012 were arrested for new offenses within 12 months of leaving prison. This is compared to the CDCR’s report released back in 2012 that indicates an average recidivism rate of 47.4 percent after one year. Contrary to the hopes of realignment advocates, this latest data indicates the state’s recidivism rate has increased by more than 12 percent rather than decreased.

In addition, the state’s failure to provide notice to counties when releasing dangerous, violent felons is the latest broken promise of the governor’s realignment program that endangers public safety. Governor Brown has the ability to immediately reduce prison overcrowding and eliminate the need for realignment by expanding existing contracts with in-state and out-of-state detention facilities.

As Los Angeles County Supervisor Michael D. Antonovich pointed out, the public was promised that realignment would:

This has proven to not be the case.

We’re hardly surprised. While some may argue it’s still too early to assess the impact of prison realignment on the recidivism rate, the fact remains that realignment is not working as its sponsors had hoped. For starters, it is underfunded for the role counties are expected to play in the program. Another big problem is that program sponsors pledged only non-violent, low-level offenders would be sent to county jails. But according to the Bee, that is not what is actually happening. In realignment’s first year, 16 percent of new arrests for county parolees were for violent crimes, including 41 murders!

As more data becomes available, we will continue to closely track the effects of reducing the state’s prison population.