What if we told you that you had the opportunity to release thousands of dangerous inmates with serious criminal records back to your community? Would you do it? Would you risk the safety of your family and community by allowing felons back onto your streets?

That is exactly what you would be doing voting for Proposition 47 on November 4, 2014.

Felons convicted of armed robbery, kidnapping, carjacking, child abuse, residential burglary, arson, assault with a deadly weapon and so on, would be eligible for early release specifically under Prop 47.

Prop 47 handcuffs judges from preventing the early release of convicted felons except under the rare exception, defined by “unreasonable risk of danger to public safety.” As vague and ambiguous as that definition of a rare exception is, even more perplexing and deceptive are the supporters of Prop 47 with their claims of “safer neighborhoods and schools.”

Prop 47 will not only release convicted inmates, but will also automatically change serious crimes from felonies to misdemeanors, leading to a hollow law enforcement system and criminal justice system.

Misleading tactics have propelled Prop 47 supporters in deceiving the public in favor of this masked legislation. How can “safer neighborhoods and schools” be accomplished by allowing serious criminals into your community that are benefiting from a legislation that will only give them a slap on the wrist?

Prop 47 DOES NOT put public safety first and we're not the only ones who have concerns. For more information, read the articles below.

“Danger from Prop. 47 is that it will result in the resentencing—and often outright release—of thousands of California convicts.”

“If voters approve Proposition 47, about 40,000 offenders a year would be affected, facing misdemeanors rather than felonies.”

“Prop. 47 is a bad idea. It will result in more crime, new victims, and less safety. Safe Schools and Neighborhoods Act? I’m not buying it.”

“Reducing the penalties for gun theft, possession of date rape drugs, agricultural crime and other serious offenses will expose our communities to increased criminality.”

“Also worrisome is that Proposition 47 allows no extra penalty for repeat offenders. What about someone who forges 10 checks for $500 each over the years? This proposition doesn’t deal with that. And for poor communities, where a few dollars matter, that is huge.”

“Proposition 47 inappropriately takes away the discretion of the district attorney to determine whether criminals with serious and violent records should be prosecuted as felons when they commit certain crimes against victims in our community. This is bad public policy and should be rejected.”

“Proposition 47, which would reduce drug and theft penalties, is a bill that shouldn't be on the state ballot… The thief who steals a $200 bracelet from a mom-and-pop jewelry in Boyle Heights gets a slap on the wrist. But walk off with a $2,000 necklace from a Beverly Hills shop and it's a felony. Doesn't click.” 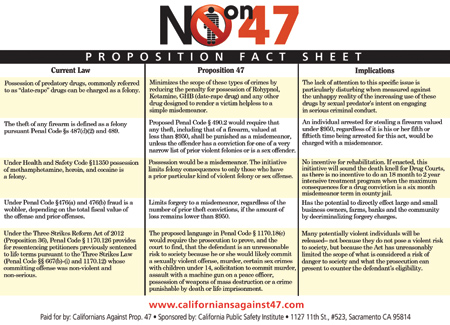 Click on the image above to view as a full size PDF.