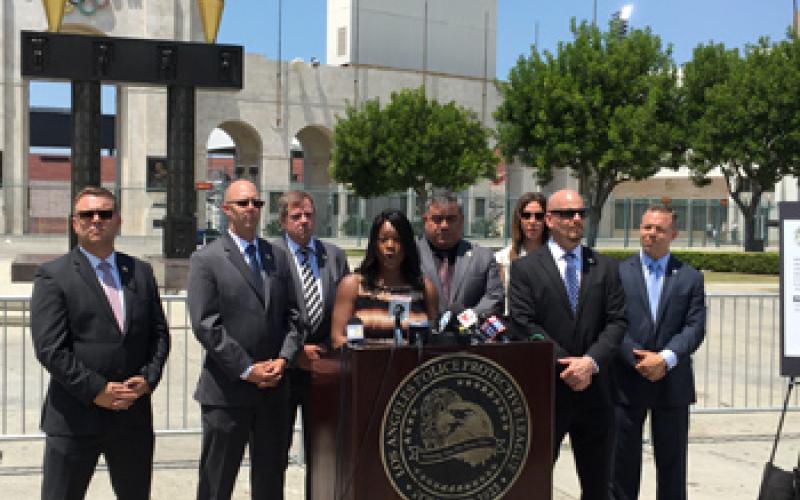 Why did the LAPPL speak out? Because our City is in the midst of a violent crime surge coupled with a crisis in our neighborhood patrol staffing levels. Because we do not have the resources, financially or personnel-wise, to provide over 200 officers every game day. We came forward because the discussions between one of the world’s richest men and the City of Los Angeles are taking place behind closed doors.

We publicly asked the Mayor to protect police services and to say no to freebies for a billionaire. His response left us scratching our heads. He said, “We will do everything necessary to make sure that all public resources are used as thoughtfully and as efficiently as possible.” Huh? That’s an excellent display of political doublespeak.

The Rams released a statement about how there are “meetings” set up over the next couple of weeks to discuss this issue with the LAPD. Those “meetings” have been going on for months and the Rams have refused to commit to paying the full cost for police services. The season is upon us and there’s no deal. A member of the media asked us yesterday, “Why is this just coming out now?” “Why didn’t the City figure this out before the Rams came back to town?” Those are good questions that only our Mayor and Police Chief can answer.

We know the command staff members who have to implement the Rams plan are sweating bullets. They’re trying to ensure a minimal amount of on-duty officers are yanked from patrol beats to assist the Rams. But the LAPD media machine is stating there will be no impacts to neighborhood safety. That just isn’t true. What they’re hiding from the public is that they’re yanking officers, who have active detective caseloads, off of their cases to provide security for an NFL team that will be leaving our city in three years. So which rape case, which juvenile abuse case and which home burglary case that you’re pulling detectives from has no impact on neighborhood safety? It’s appalling how, given the opportunity, the brass just can’t level with the public.

Make no mistake, we’re excited the Rams are back in the L.A. area. However, we cannot let our excitement cloud the issue of why we are here: to protect the people of L.A. Violent crime in Los Angeles since 2014 is up over 42 percent. There really is only one person who can ensure that the man considered one of the most powerful men in sports, who owns an NFL team, an NBA team, an NHL team, an MLS team and an English professional soccer club, pays his bills. That’s Mayor Eric Garcetti.

Earlier this year, we pleaded with the Mayor for more funds to increase neighborhood police patrols, but we were told the City couldn’t afford it. That’s a basic service. So, we expect him to tell the person aiming to capitalize on the nation’s second largest media market that we just can’t afford to give you a free lunch today. Sorry.

We’re counting on the Mayor to put our residents’ interests above the interests of the super wealthy and super powerful. We put sunlight on this issue because we believe that the public deserves transparency in this matter. If the Mayor steps up and puts safety first, he deserves praise. If he decides that L.A. is in the business of corporate welfare, well, he can explain that decision to residents, taxpayers and voters.

Mayor Garcetti, it’s fourth down and we’re behind in the last quarter. Will you lead the come-from-behind win? Or will you take a knee and hand the game to the billionaire?